Men’s Violence Against Women – It’s terrorism to us

I recently read ‘Men Who Hate Women’ by Laura Bates. It is, among many things, a brilliant and harrowing exploration of the many internet communities of men who fear, avoid, abuse, harass, rape and kill us. I have described it as the most difficult book I have ever read because Laura Bates, quite rightly and very effectively, transcribes verbatim what some of these men (and sadly boys) write about women, about us. In some parts, she includes a very small sample of the hourly abuse and rape and death threats she herself receives, in others it is posts on subreddits and forums where in real-time you can see men encourage each other to commit heinous acts of offline violence – sometimes, the post is updated to confirm the disobedient girlfriend has been beaten or raped. It is a book that I believe everyone should read, though it will be difficult and painful.

The book also raises the often-ignored point that the actions of men amount to terrorism under most countries’ definitions. And yet mass killings motivated by misogyny are, bar one exception in Canada, almost never described in mainstream media or charged as terrorist acts with the clear aim of instilling fear amongst all women. Some of the men have published excruciating manifestos explaining exactly their motivation to punish all the women who had denied them sex and yet the media is silent. Not only that, they fall over themselves describing it as a lone incident, a shooter working alone who was mentally-ill, an isolated act committed by a nice (white) young man who was greatly suffering from loneliness. In some cases, they omit the misogynistic motivation entirely, in others they irresponsibly publish huge parts of the manifesto or, horrifyingly, the videos made by the killers, maximising the audience reached and spreading the hate message across the internet for others to emulate. We really needn’t go into detailed comparisons with the actions and strategies of those more usually described as terrorists to know this is not how those acts are reported.

Three days after I finish the book, I begin watching Netflix’s true crime series ‘The Sons of Sam’, documenting a journalist’s obsession with a series of killings in New York in the 1970s. The killer was (of course!) targeting women. Specifically young women with shoulder length brown hair parked in cars with boyfriends or walking home. Fourteen minutes into the first episode, we’re shown interviews with women as the time, describing how some had begun wearing headscarves to cover their hair, colouring it or cutting it so that they might be safe from this killer.  A hairdresser speaks about women flocking in to have their hair shorn short, even though this is not “becoming on them”. This is something I’ve seen before.

Many of my feminist friends or fellow nia volunteers will not, cannot, watch true crime because of the work we do and the reality we are already faced with on a daily basis. This, quite reasonably and sensibly, is more than sufficient for them and they refuse to seek out more content about raped and murdered women. I, on the other hand, am drawn to understanding these acts and the connections between them. I’m right on trend actually, with Netflix alone pumping out dozens of shows about prolific and notorious killers. Most (of course!) are killers of women. I consume what some might consider an unhealthy amount of this content. But not once have I seen the actions of these men described as terrorism, even in relation to prolific serial killers who only targeted women. Hours and hours of footage and testimonials recounting how women have always changed their behaviours in response to these acts, indeed have been expected to do so, instructed to do so by police and press, but not a word about how this, in any other situation, would be the most significant and effective campaign of terror ever conducted by any group in history.

No one would say that Sarah Everard’s killing was a terrorist act. We don’t conceptualise it as such. It was an isolated act of violence, perpetrated by one man against an unlucky woman. But. But. My mother stopped running after dark. Just a couple of nights before, she had been running alone in the evening in a country road when a van began following her. She began immediately to plan an escape, where to run, how far until she could reach help. The van simply passed her by and turned onto the main road, but she ran straight home, shaken and thinking about the other possible outcomes. A few days later, Sarah Everard is splashed across every newspaper and my mother stops running after sunset altogether. My best friend, a week after the disappearance, calls me twice in the evening. Embarrassed and ashamed, she tells me it’s nothing really and she was just walking alone at night and wanted to talk to someone until she got home. She’s been followed home before and Sarah’s death is another reminder of her inescapable vulnerability.

So, no, the man who is accused of killing Sarah Everard isn’t a terrorist in the way we normally think about such things (and neither are the men accused of killing Julia James or Beth Aspey or Maria Rawlings or any of the 53 other women  so far suspected of having been killed by men in 2021), but my mum and my friend are just two of the women I know who he terrorised without ever knowing their names or what he did to them. We women continually change our behaviour in response to these ‘isolated’ acts of violence because we know, we feel, they are connected, that it could have been us or a friend, a sister, a mother.

If terrorist acts are acts perpetrated by a certain group, in the name of an ideology, with the intent or consequence of causing widespread fear and behaviour-change, then how can this be conceptualised as anything other than terrorism? Individual men may be committing them, but it’s always misogyny. It’s all a suffocating tapestry of violence directed at us, a network of male violence connected by the same desire to make us afraid, to make us powerless. We were told to stay home when the Peter Sutcliffe was relentlessly killing us almost fifty years ago, we were told the same after Sarah Everard died. Neither man was called a terrorist. And yet we’ve cut our hair, avoided darkness, spent money we don’t have on taxis, bought rape alarms, abided by curfews, stopped walking our dogs, chucked drinks left unattended, ‘asked for Angela’, made ourselves smaller, made ourselves invisible because we’re terrified. It’s all terrorism to us. It is all connected.

PrevPreviousThe difference made by having an IDVA (Independent Domestic Violence Advocate) by my side
NextA short statement from our Chief Executive, Karen Ingala SmithNext 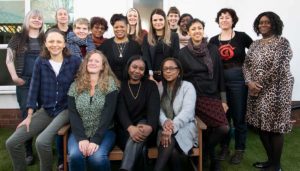